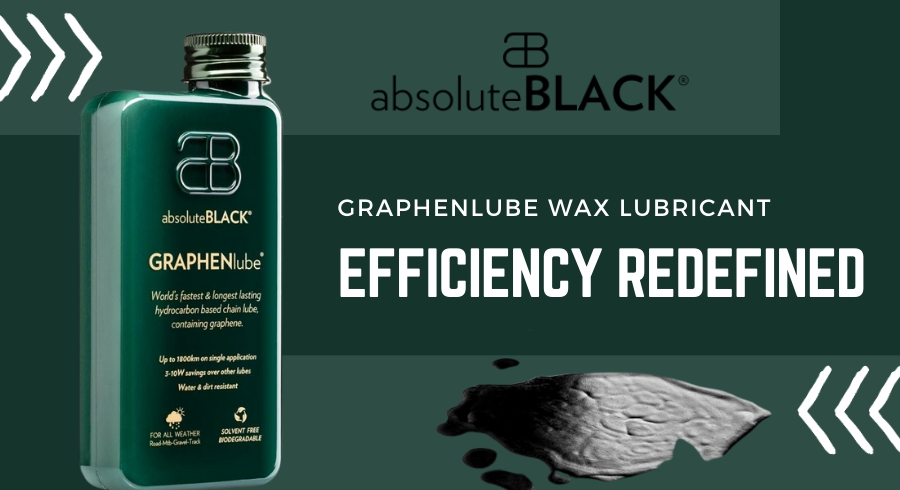 The Ultimate lubricant made for Winners. GRAPHENlube – World’s first hydrocarbon-based (wax) chain lubricant containing Graphene. It exhibits extraordinary durability at single application whilst maintaining impressively low friction for a prolonged period of time in both wet and dry conditions. It’s everything you can really wish for in lubrication. Up to 1800km on single application (dry conditions), 3-10W savings over other lubes. "The Ultimate" series is only available here on our website.

WE ARE AN OFFICIAL SUPPLIER TO UAE TEAM EMIRATES

absoluteBLACK is an Official supplier of GRAPHENlube to the UAE Team Emirates, supplier to Team Jumbo Visma as well as supplier to several additional Pro Tour Teams under non-disclosure agreement.

Because of the very complex manufacturing process the graphene lube is only produced in limited quantities at a time and will be sold on a first come, first served basis.

In simple terms it’s a “wax” based water emulsion, with a special mix of high purity graphene, that is liquid when you apply and becomes almost solid when it dries on the chain. Wax based lubricants exhibit far greater tolerance to water and dirt contamination, successfully separating moving chain parts from abrasion and filling in all the imperfections on friction surfaces. Graphene – the wonder material that is still not commonly used because of its incredibly high cost, is a great additive for a few reasons. It has extremely low friction coefficient in all the environments, is far stronger than any known material to a man and it can cling to metal protecting friction surfaces from excessive abrasion. Moreover, it repels the water and is not permeable to air reducing therefore oxidative stress on the metal surface. Even a single atom layer is enough to reduce the friction considerably.

It took us two years to find the right ratio of crumpled to non-crumpled graphene, size of graphene platelets, dispersion rate of agglomerates, concentration and finally figuring out a low friction hydrocarbon emulsion base that will stay on the chain for very long time and not chip away like paraffin wax is known for. The end result is a lubricant that on a single application will hold sub 5 Watts of frictional losses over 900km distance. We have created essentially a new category of performance lubricants.

But why should you care about this number?

For the same reason why Pro Tour teams are eager to use it. It gives you “free” power regardless the conditions.

GRAPHENE IS NOT GRAPHITE

Despite of the fact that both of these materials are only built from carbon atoms, the similarity ends here. Graphene possesses completely different mechanical and tribological properties to graphite. For example, graphite exhibits 0.1-0.2 COF (coefficient of friction) in very humid air, but 0.5-0.7 COF when air is dry, which is very high friction comparable to steel on steel sliding without lubrication. Graphene, on the other hand, is very stable across full spectrum of humidity with 0.1-0.2 COF. Graphene also possesses incredible mechanical strength allowing it to effectively separate metal surfaces and suppressing wear rate by 1-2 orders of magnitude in comparison to graphite. To sum up, using graphite instead of graphene in the same solution, would produce completely adverse results. 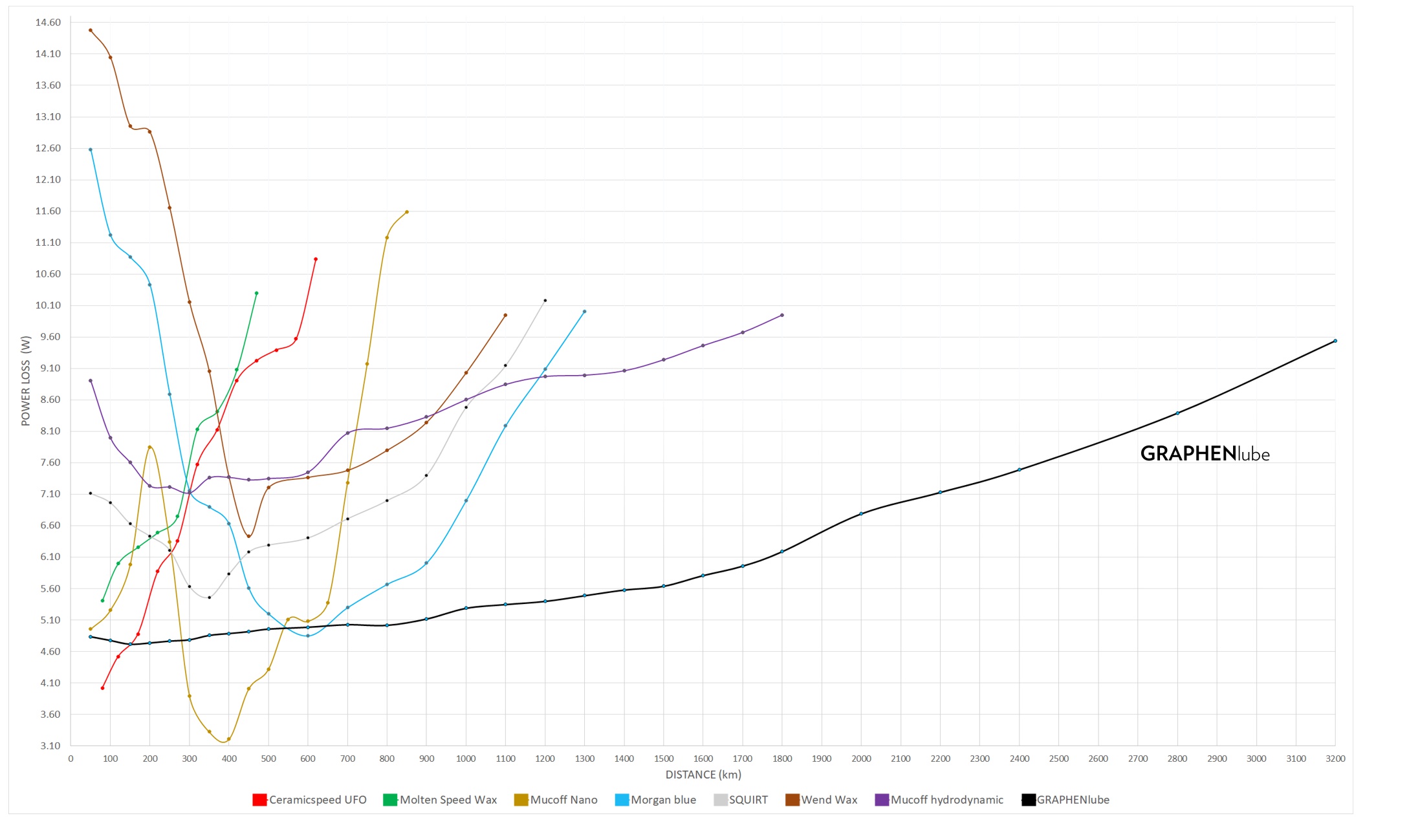 This test reveals how lubricant and its friction changes over driven kilometres on a single lubricant application. The higher the number the more Watts you are losing. With “wet/semi wet” lubes friction first decreases because chain gets drier and therefore stiction decreases. Until it reaches more or less dry state – the friction then increases due to starvation of lubricant and abrasion. For “dry” lubes/films, stiction is already minimal, so they will only increase in friction due to coating wearing out.

To understand why this test is so important, let’s look how power is generated on the bike. When you press on the pedals, this force/torque is then transferred through the chain to the rear hub. If you happen to own Crank based power meter you can see power number represented in Watts. However, power generated at the crank does not equal power at the hub due to frictional losses. The majority of those loses are due to hundreds of articulations of chain link elements per second. Therefore, the above graph shows how much less power is delivered to the rear wheel compared to the power at the crank. Or in other words you would have to increase power at the crank if you want to retain the same speed with passing kilometres. Even the best lubricated chain in perfect laboratory conditions still generates about 4W of frictional losses from the start. Shimano Dura-Ace chain out of the box for example, varies between 6.5-13W. It’s not possible to avoid this loss.

But what we can do is to minimise this loss and keep it low for a long time. In other words, it’s “free” power you (re-)gain at the rear wheel while pushing exactly the same watts at the crank. We don’t create extra watts, but we regain part of the inevitable losses due to drivetrain friction.

We have also conducted a simple test comparing lubricants where we used a rider instead of an electric engine to propel the cranks. On the above video you can see how big role lubricants play in transmitting power to the rear wheel. It's an exact same setup as riding on a turbo-trainer (Imagine those Zwift gains!). By mere change of the lubricant, the rider in this test gained 7.3W. Or another words had to push less by 7.3W (that is 12N or 1.2kg / 2.65lbs) on each pedal stroke while keeping the same cadence and gear at fixed 250W power output. 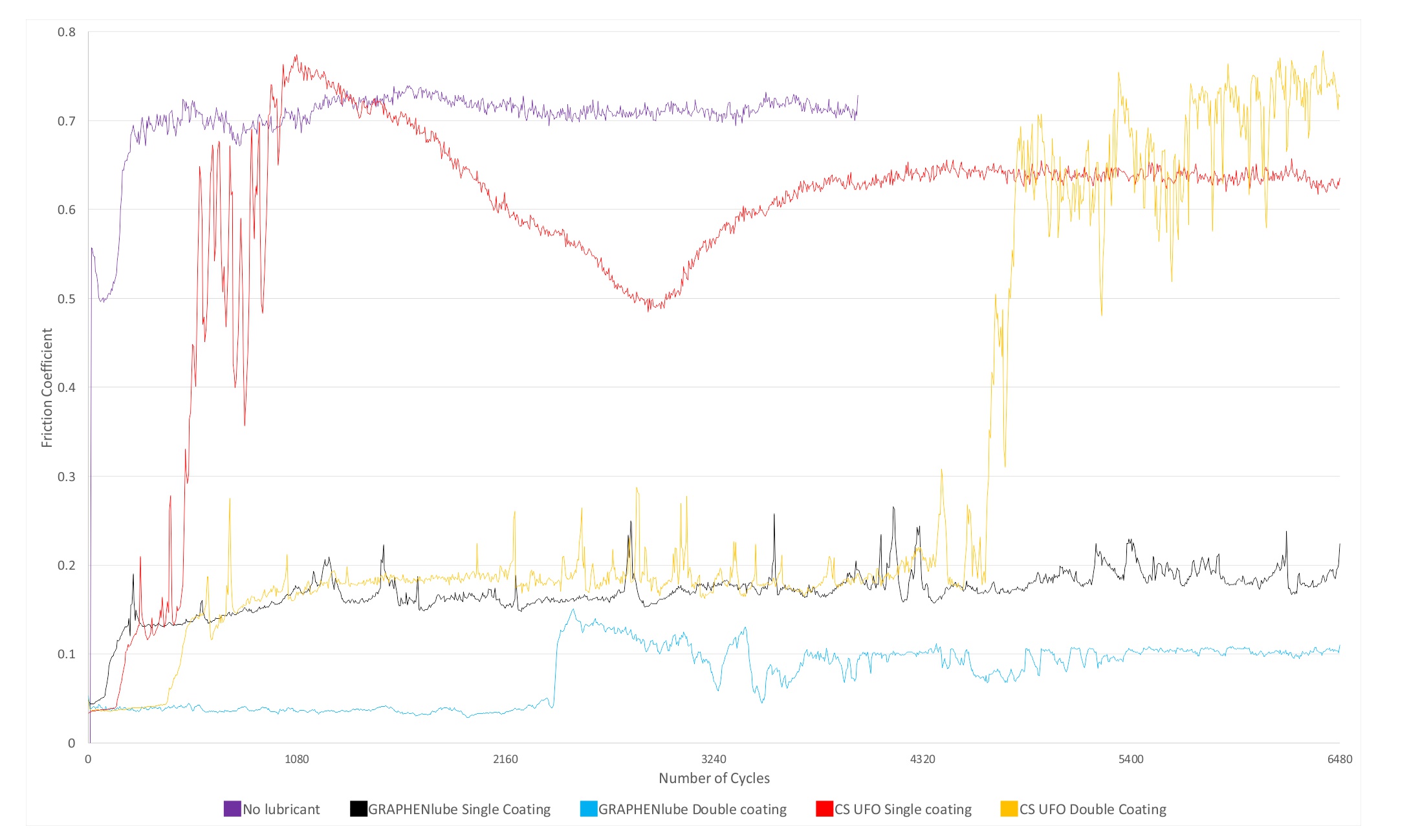 Graph2. Pin-on-disc test showing tribological properties of friction and wear. Independent study conducted by University of Science and Technology in Krakow, Poland according to ISO 20808:2016 norms at 25deg C and 25% humidity. Both lubricants were applied to the respective discs and let to fully dry. Each test was repeated 3 times.

To test it further, by eliminating the individual chain friction variability that can potentially skew the lubricant’s test results, we asked the University of Science and Technology in Poland to conduct a Pin-on-Disc tests according to the ISO 20808:2016 norms. With this test scientists measure all those friction coefficient figures on any material or liquid by spinning a metal disc with lubricant coated on, under a static ball(pin) that is being pressed to the disc with a known force. The test tries to mimic conditions of rubbing an inner link hole with the chain pin surface. The calculated distance compared to the number of cycles gives a hypothetical 300km life span of the test. The increase in friction means that the lube wears out under the pin leading to more abrasion and further escalation of friction due to lose metal particles. We can see a good correlation to the first graph which explains the Wattage loss changes. We also clearly see how the amount of the lubricant impacts variability in the friction coefficient. For that reason, never skim on the amount of lube you are using. 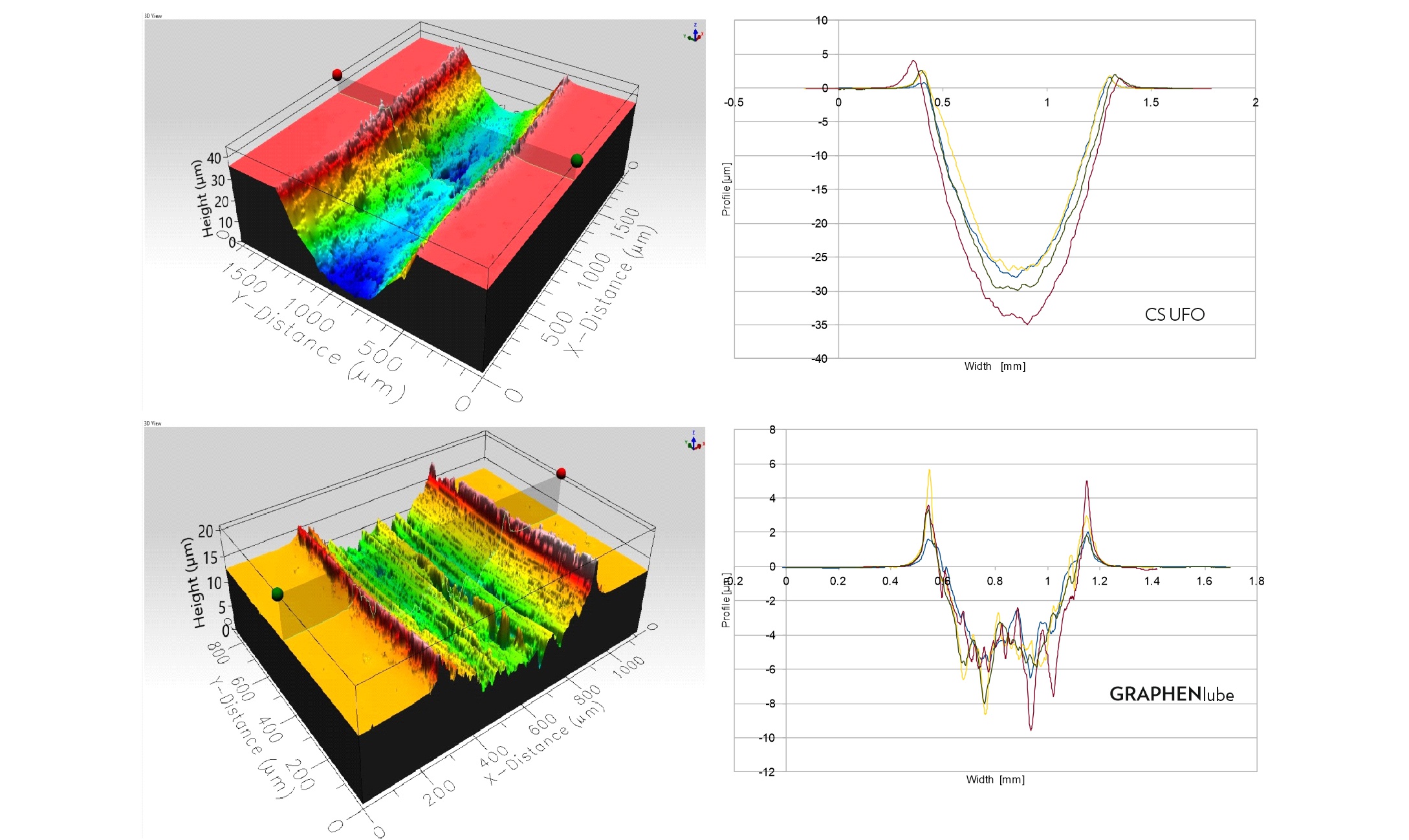 The above pictures show the surface of the hardened steel disc after finishing the test from Graph2, showing how much damage the surface of the disc suffered. The amount and depth of abrasion is almost 5 times bigger on the top sample compared to the bottom one. This is the snowball effect of lubricant depravation that creates loose metal particles, which in turn increase the abrading effect creating more particles.

Graph4. Test conducted by ZFC showing the chain % wear in various riding conditions.Every block represents 1000km. Test is done according to ZFC standardized process. The test is stopped when accumulation of wear reaches 100% (cumulatively from all blocks). The GRAPHEN lube in this test was an early prototype version.

ZFC aims to test lubricants in various conditions ranging from no contamination, dry contamination (sand), wet contamination and extreme contamination. Chains are kept dirty and lube is applied at certain intervals. The exception is Molten Speed Wax which due to the nature of lube application (by cooking) is always clean and fresh after every re-waxing. Even early prototype results show that GRAPHEN lube exhibits great durability and very low wear in all conditions.

WHY YOU SHOULD STOP USING OIL

To understand why oil is not a good idea we need to look at how a chain is actually made in first place. We have used Electron SEM microscope to show you a cross section of the inner link (plate) at the point where hole for the pin is. You are looking at the half of the inner chain link’s cross section. 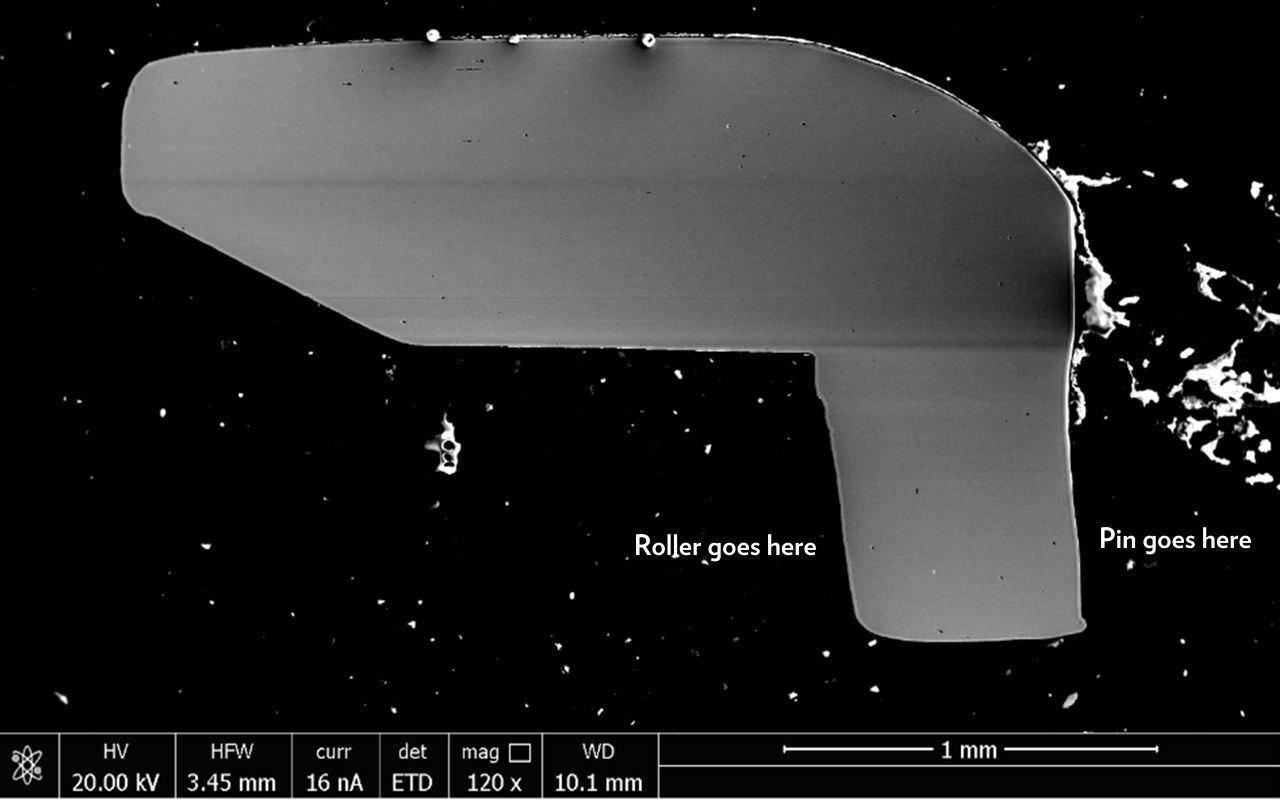 Most of the friction in the chain comes from two surface pairs: the inner surface of the protrusion in the inner link (hole in the link for the pin) rubbing on the surface of the pin, and the inner surface of the roller rubbing on said protrusion from the outside. From the image, it’s very clear that those exact surfaces are not very even nor straight. Oil based lubricants are not capable of creating a sufficient boundary film to lubricate because surfaces are uneven, allowing metal on metal contact to occur which creates metal particles that escalate the abrasion. This is why wax based lubricants perform better because they are in semi solid state and capable of filling gaps adequately, separating the surfaces that create friction. For the same reason certain thin film coatings wear out relatively faster as they are not thick enough to fill in all the gaps and rely on additives like Teflon particles that play a role of a ball bearing for a short period of time.

HOW TO LUBRICATE YOUR CHAIN WITH GRAPHEN LUBE (AFTER FIRST APPLICATION)

1. Wipe the chain with a cloth. (Use gloves)

2. Shake the bottle. Apply the lube continuously to the inside of a chain turning cranks backwards (simple dripping procedure).

3. Let the lube dry for a min. of 2h before riding, ideally overnight.

*For absolute maximum Racing performance where every watt counts, re-lube (by dripping) every 600km or sooner in dry conditions and after every wet ride. If you race, apply a day before the race.

*For everyday riding you can re-lube (by dripping) between 600-900km in dry road conditions and after 2-3 rides in wet conditions or when you hear chain becomes dry.

*Always apply to a dry chain.

Watch the video to find out more: